The word pavese have its origin in the italian town of Pavia. It was the first place this type of shield was used in the middleages. The shapes origin is actually much more older than one would think. Even the Romans took the design from the Greeks who used the shape in the ancient times. A pavese shield is only used for infrantry, but it had several different uses. One was to form a shieldwall on the battle field, the shields linked together which provided cover and could stop the enemy. The second use wa

s a as a cover to the crossbowmen, who could evade enemy fire by ducking behind the shield and reloading. The third use was in city warfare or castle sieges. The shield was perfect to push people out of the way if unrest occured and at the castle the shield excelled at the fight at the siege towers and narrows crosswalks. A pavese shield varies in size, depending on its purpose. A shield for the crossbowmen was twice the size as the one used by the infrantrymen. Today there are still lots of original pavese shield from the the middlesages. In some german cities, it is still possible to admire several survivng shields from the towns defences.les or other possible means t secure the bag, meaning we had to experiment for the most likely solution 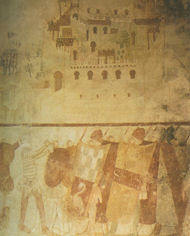 Our Pavesi was inspired from different sources, including the famous fresco “I guerrieri di Arco( the warriors of Arco) which depicts several infantrymen from around 1350 armed with pavesi shields and spears. But the biggest influence and inspiration came from our Italian friends from the Compagnia de Portal Giovia. This famous group was the first to have these shields made for reenactment. Since these shield have become and essential part for every group who reenacts the arts of war. The shields is made like they always have. A frame of bent wood, then clad with two layers of flax on the front and the back, end then it is clad with a hide that have been tanned until the stage before the quality of parchments. The shield is finished off by adding a padded pillow of leather on the inside of the shield, to prevent bruising on the elbow when blows are struck on the shield. Buckles and leather straps are added to wear the shield as comfortable as possible.
Below are the drawings of the Arco warriors from the fresco, and it is possible to see the design of the inside of the shield. 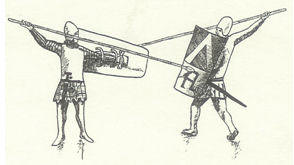 The heraldic meaning of our shields
Several people have asked us about the crest of our pavesi. Our shield is a blue background and a yellow ribbon and the three blue lilies. This is the weapon crest of Francisk von Rafenstain. You can see the original version under original Rafenstain documents and see his personal sigil.

The small crest of arms which is placed on the heraldic left( meaning the right) have a red background with a white line, where a star and moon have been painted. The shield represents the town of Gries, where Knight Francisk von Rafenstain conducted his job as a judge.

Two original Pavesi Shields. The one to the left is from the town of Erfurt in Germany and the one to the right belonged to Taddeo di Bartolo, from Italy.

Both shields are dated to around 1350.

Our pavesi shield which was reconstructed by Charles Rafenstain and Benjamin Frank. 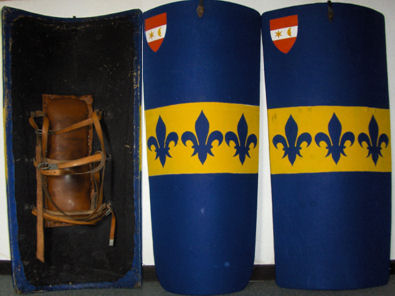