A box chair is an indispensible part of the castle interior. There are several version of box chairs, later developing into the well known barrel chair from the 1500th century. The purpose of the shape of the chair is to catch the heat from the fireplace, and at the same time shield from the draught in the house. The medieval alcove was built in the same principle, where the people was sleeping in a kind of wooden box, with an opening in the upper part – actually a kind of “bird house” for men. In the medieval housing they tried to optimize the heat distribution and consumption partly this way. In the most surviving houses and farms from Tirol, the same methods are used as in Scandinavia. The living room was near the kitchen, and often a part of it. When there was being cooked – and fire was roaring in the fireplace, the heat was going into the living room. The living room was kept warm during the night, while the rest of the house remained cold. Sleeping quarters were often built beside the living room, and when people were going to bed, the door to the living room was opened, to get the heat in. People in the medieval ages knew – if anybody – the value of firewood

The picture of the original box chair from England, around 1400, Broughton Castle 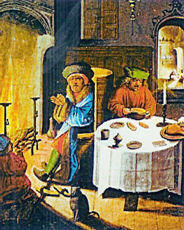 Illustration of a home from the 1500 years. Note the barrel chair at the fireplace.

The reconstruction itself was done by Peter Vemming and Charles von Rafenstain in the carpenters shop on the Medieval centre. It took at least 30 hours of volunteer work after working hours to make it. The chair was built oak planks that are sawed and planed by hand. It is surprising to see how many planks are used to produce this one chair. I will assume that 40% of the wood consumed in the process is remaining in the finished chair. When producing furniture it is important to use well stored and dry wood. All in all I can only recommend to make such a chair. It is comfortable to sit in – especially due to the shelter effect. Apart from that it is a pleasure to use it in front of an open fire, while reading a good book, or just enjoying a mug of red wine 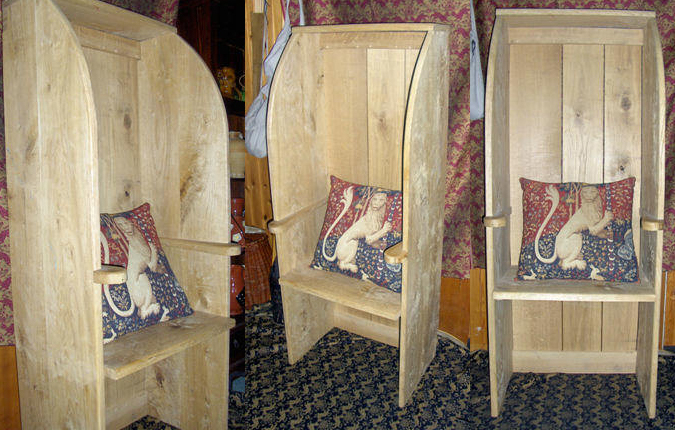